“Libraries will be advocates for and facilitators of the Fourth Industrial Revolution, where people create their own devices and objects” (Ahmat and Hanipah, 2018). This was concluded during a July 2017 special Global Vision discussion commissioned by The International Federation of Library Associations (IFLA) on the Fourth Industrial Revolution (4IR) concerning libraries.

In response to libraries being advocates and facilitators of 4IR, Johannesburg (Joburg) libraries introduced Coding programmes, in 2018 to equip young children with coding skills at an early age. This programme, which was disrupted by Covid19 pandemic, was reactivated in 2022, during the MARCH/APRIL 2022 holiday programmes. Introducing more school learners to this coding program is in preparation for the programmes Africa Code Week (ACW) held in October, which “advocates for creating free opportunities for young Africans to learn coding skills and digital skills”.

Through these Coding programmes, Joburg libraries fulfil their mandate of “playing a key role in contributing to the skills development of city residents” by introducing much anticipated and in-demand digital skills, to young children. These skills are regarded as the requisite in the 4IR. Coding is regarded as the cornerstone of 4IR, on the basis that the technology that propels 4IR rely heavily on coding, e.g. APPs, Drones, Animations, Robotics, etc.  Therefore, Joburg libraries saw it fit and appropriate to introduce coding programmes to young children in the form of Tanks Coding during the MARCH/APRIL 2022 holiday programmes.

TANKS coding is a game that makes use of puzzle tokens, image recognition, and a smart device (smartphone/tablet) App. It introduces participants to basic coding concepts and skills by allowing them to indulge in gamification that uses puzzle tokens, converted into instructions using the Tanks App downloaded on a smart device (cell phone or Tablet) from Google Playstore for free.

The provision of coding programmes indicates that libraries are no longer just hubs of information and knowledge, but are dynamic institutions reimagining and repurposing themselves to meet the ever-changing needs of their patrons; including acquiring a new set of skills. The coding programmes were introduced and implemented as part of Joburg Libraries’ holiday programmes to keep children away from the streets and keep them engaged in library organized programmes and to learn new skills. 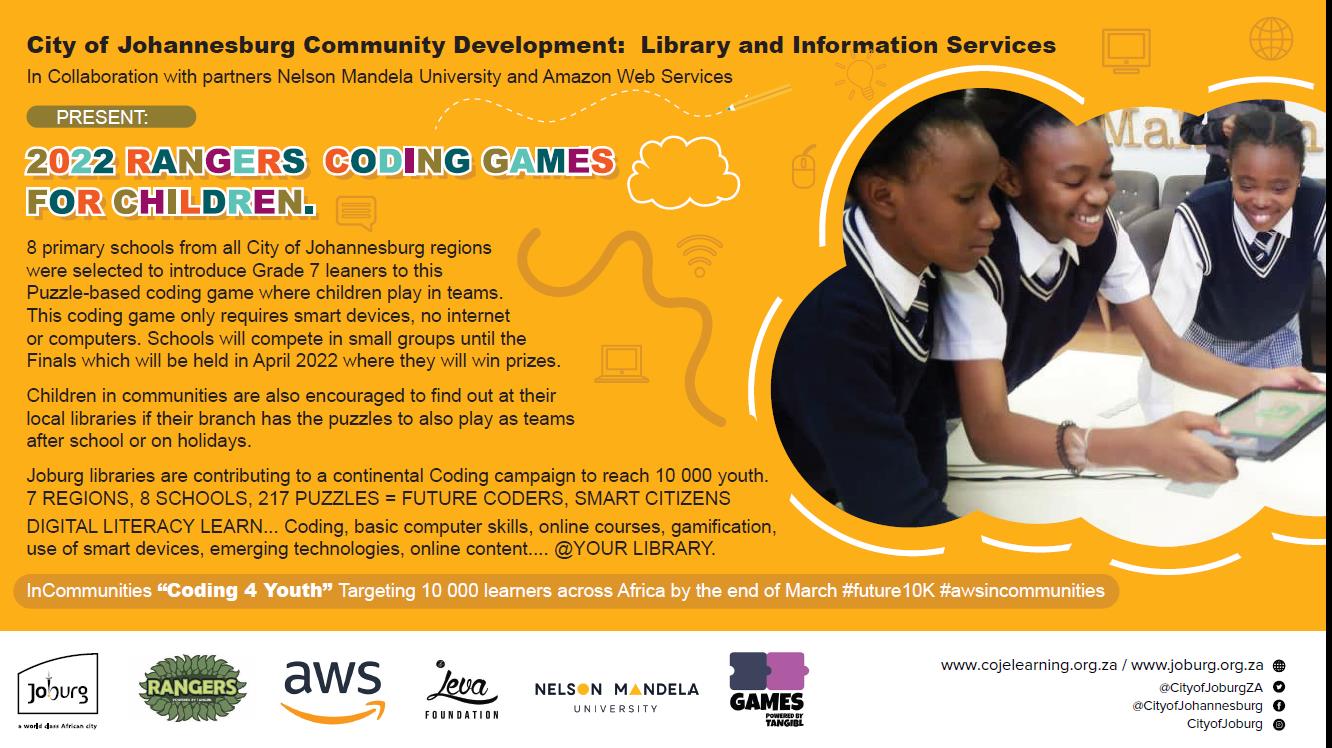 Learning coding at an early age equips children with critical skills such as organization; problem-solving and critical thinking and empowers them for the future. In addition, coding skills reinforce math skills, collaboration, and creativity; stimulate the imagination of children.

The usage of tablets in library programmes brings an element of excitement to the children. In addition, it is fun and captivating learning which in turn encourages young children to learn more and explore the Tanks Coding game in order to collect maximum points. The more they got excited about reaching the highest level of the game; the more they learn and gain insights into solving complex challenges.

Learning and acquiring coding skills is more important and relevant to participating actively in the 4IR. So look out for holiday programmes in your local library to learn these valuable skills.